Best-selling author has high hopes for senolytics and wants society to realise that aging doesn’t have to be inevitable.

What is happening as we age, and how can we slow down the process? Just some of the questions that scientist-turned-writer Dr Andrew Steele addresses in his critically acclaimed book Ageless: The new science of getting older without getting old. The book, which came out in paperback earlier this year, takes a broad look at the field of longevity science and seeks to explain why aging is not a biological inevitability.

Longevity.Technology: While many of the researchers we speak to have a particular focus on certain aspects of aging, Steele takes a scientist’s view of the field as a whole, providing a unique perspective on the cutting-edge research that he believes “could lead to the greatest revolution in the history of medicine.” We caught up with him for a fascinating conversation on the current state of sector, where the best opportunities lie, and his somewhat controversial belief that our goal should be to “cure aging.”

A physicist and computational biologist by training, Steele became convinced quite early in his career that aging was the single most important scientific challenge of our time. In fact, in his book, he refers to it as the “world’s greatest humanitarian challenge.”

“To many people, who believe aging is a natural, inevitable side-effect of being alive, this probably sounds like quite a strange thing to say,” says Steele. “But what really drew me to this idea was a statistical realisation predominantly based on the graph of how your risk of death changes depending on how old you are.”

Aging: the biggest risk factor of all

The statistics say that our risk of death doubles about every eight years, and the raw numbers behind that shocked Steele, who, at 36 years old, has a risk of death of about one in a thousand today.

“I quite like those odds,” he says. “But if I’m lucky enough to make it into my 90s, and there’s no progress in medical technology in the intervening time, my risk of death in the first few years of my 90s is going to be one in six, which is life and death at the roll of a dice.”

Rather than simply accepting the fact of this approaching “wall of mortality”, Steele considered the information through a physicist’s eyes.

“It was fascinating to think about what might be driving this shockingly synchronised increase in the risk of all these different diseases, frailty, and all these different changes that are happening our biology,” he says. “And, if we could understand what’s behind that, could we do something about it?”

These questions led Steele to discover the research that has been going on in the longevity field, and that indeed it is possible to “do something” about aging.

“This was around the time when the rapamycin experiments showed lifespan extension in mice, so there was a lot of excitement around that,” he says. “And then the hallmarks of aging paper came out a couple of years later, and there was a coalescence around the idea of what aging actually is, which had been a huge mystery for a long time.

“So, on one hand we had aging – the world’s biggest humanitarian challenge, and on the other we had the scientific tools to rise to that challenge. And so, I thought – this is the field where I need to be.”

Spreading the word on longevity

To pursue his interest in aging, Steele switched focus to become a computational biologist and spent the next decade or so building his knowledge and understanding of the field. His decision to write Ageless came through a realisation that, while those working in the longevity field are fully aware of the promise it holds, most people are still blissfully unaware of the exciting progress being made. 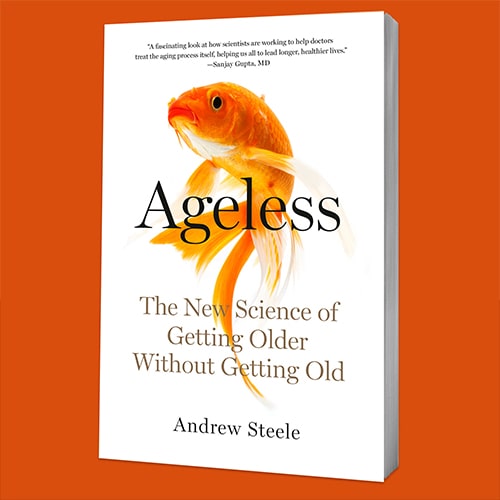 “What I really wanted to show that this is not some sort of wacky sci-fi nonsense, which is how I think a lot of people, including scientists, imagine the field of aging,” he says. “They think it’s this inevitable, super-complicated process that we can’t possibly intervene in or study in any useful way.”

While he wrote the book to help get the word out on aging science to everyone from the public to policymakers, Steele was also surprised by how often he came across scientists and doctors who knew nothing of the work going on in the aging field.

“It was incredible – someone could have a great PhD from a great university and literally have never had a lecture on aging biology. It’s not in the textbooks. My wife is a doctor and when I met her, I think she thought I was crazy talking about all this anti-aging stuff. And yet, she is probably going to have to prescribe anti-aging medicines during her career!”

With his broad view of the aging field, does Steele have a view on which areas hold the most promise for delivering a therapeutic that will show results in humans? While he acknowledges that diabetes drug metformin may end up being the first, the potential he sees in senolytics is far greater.

“Metformin is a pre-existing drug – it’s off patent, so it’s going to be super easy – if the TAME trial works, we can start prescribing it essentially immediately,” he says.

“But the thing I’m most excited about in the near term is senolytics. They are going to have a slightly longer path to market because they’re currently being trialled for specific conditions, and there are a few more steps before we start handing them out to healthy 50-year-olds. We need to be really sure they’re safe, they’re doing what we think they’re doing, and that they don’t have any long-term side effects.”

While metformin’s longevity benefits could be thought of as a “side-effect” of some other biological processes, Steele feels that senolytics present a more compelling proposition when it comes to targeting aging.

“I’m more excited about senolytics than am I about metformin because we’ve got a really good idea of what they’re doing, why they’re doing it, and how they work,” he says. “And I think that means they are going to be the first ‘true’ anti-aging medicine. Yes, metformin could turn out to be important, and it could give people more healthy life, but I think the effect will be smaller and less significant from a scientific and medical point of view. I’m more excited by the idea of something that goes after one of the hallmarks of aging.”

Be safe and be bold

Of course, to prove that age-targeting therapies are working, Steele acknowledges that we need a way to conduct proper trials and to find ways to clearly measure changes in our aging as a result of taking them. But he also feels that efforts to define aging shouldn’t hamper our progress towards getting safe interventions approved.

“I think it’s important that we sort this out because, if we wait for certainty, then we’re going to end up leaving a lot of healthy life on the table,” he says. “The point is going to come where we’re pretty sure that some combination of measures of biological age is meaningful, and therefore, it would be irresponsible of us to just ignore that fact.

“But the real challenge is, when do we consider these things safe? And this is a question for scientists, regulators, politicians and the public to have a debate about. Because I think it’d be a great shame if we spent 300 years doing the perfect set of trials and discovered that we had the anti-aging drug all along.”

Can aging really be “cured”?

The ultimate goal, says Steele, should be to “cure aging” – a phrase that many in the field are uncomfortable with.

“What I mean by curing aging is having a risk of death that doesn’t vary depending on how long ago you were born,” he says. “A lot of scientists, even aging biologists, get a little bit squeamish when you say that. But I really do think that should be the fundamental aim of all medicine.”

Steele uses cancer as an example and says that most scientists working in that field would agree they are working towards an end goal of curing cancer.

“I don’t see why aging should be any different,” he says. “At least the aspects of aging that cause frailty and discomfort and distress and pain and disease and all these horrible things we want to get rid of. I don’t see why our goal shouldn’t be to minimise that human suffering as far as possible. And to me, that means curing aging.

“How possible is that going to be? I’m absolutely convinced it’s possible at some point. There’s no law of biology that tells us we must age – we can look around the animal kingdom and see animals that don’t age, they’re negligibly senescent, they have exactly this risk of death that doesn’t vary depending on how long ago they were born. The real question is, are we clever enough? Is our biotechnology advanced enough? And are we going to get lucky enough that it’s going to happen in our generation?”

The post Andrew Steele: Our goal must be to cure aging appeared first on Longevity.Technology.